The Crisis of Civic Illiteracy and Disengagement 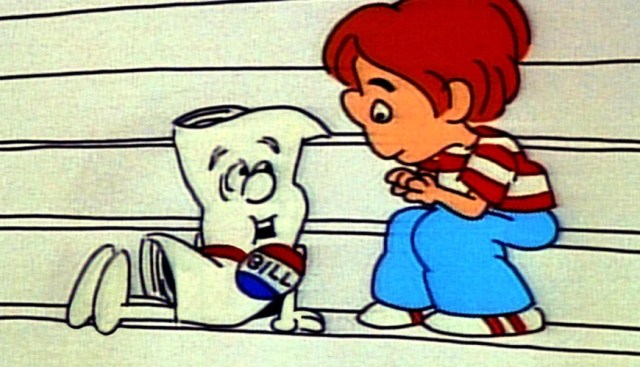 SCHOOLHOUSE ROCK: A scene from the popular song “I’m Just a Bill”

For anyone remotely tuned-in to public dialogue on law and policy, the criticism that a proposed action is unconstitutional is a familiar one. But while some exclaim, “That’s unconstitutional!” others just as readily respond, “Who cares?” At least anecdotally, the honest answer to that question seems to be “some, but not others.”

One may venture to guess that any modern disregard for the virtues of our written constitution has at least as much to do with a genuine belief in the importance of popular sovereignty as it does with an ignorance of the importance of our Constitution to preserving that sovereignty. This disconnect can be largely attributed to an embarrassingly abysmal civic IQ. The reality is, the United States is collectively uneducated and ill-informed on critical topics, such as our Nation’s history, the structure of our government, and basic political theory. That reality represents a big problem for our constitutional republic, whose design presupposes—indeed requires—an informed and engaged citizenry. If We the People are to be in charge, We the People must be equipped for the job.

As Thomas Jefferson wrote from Paris in 1789, “wherever the people are well informed they can be trusted with their own government.” The implication is that a poorly informed people cannot be so trusted. This intuitively makes sense because, in a system of self-government such as ours, society’s future is quite intentionally left to “the people.” Indeed, the Preamble to the Constitution makes immediately clear the gravity of our civic responsibility:

We the People of the United States, in Order to form a more perfect Union, establish Justice, insure domestic Tranquility, provide for the common defense, promote the general Welfare, and secure the Blessings of Liberty to ourselves and our Posterity, do ordain and establish this Constitution for the United States of America.

The need for an enlightened and engaged citizenry is inescapable in the face of a system that charges We the People with establishing justice (we must contemplate what justice is), defending ourselves (we must consider when force is morally justified), providing for the general welfare (we must understand the danger of factions), and securing liberty (we must educate ourselves on the history of tyranny).

We the People, however, are failing to keep ourselves adequately informed. A 2017 Constitution Day survey administered by the University of Pennsylvania’s Annenberg Public Policy Center found that only “26 percent of respondents [could] name the three branches of government.”

How are We the People to protect our rights when we do not know what those rights are or who might infringe them? Yet more frightening is that while Americans are becoming more ignorant of their political institutions and responsibilities, they believe that “the internet and cell phones have made them better informed about…national and international news.” But having easy access to information is not the same as being knowledgeable, and the risk is that as more Americans rely on the assumption that answers readily exist on Google, they will be less inclined to use their own faculties of reason and logic—key components to the kind of productive civic debate that drives good self-governance.

Americans already have a self-awareness of this, as only 49 percent say they feel the internet and cell phones have left them better informed about civic and government activities in their communities. To frame it another way, Americans seem to be consuming discrete nuggets of information—think push notifications and Twitter feeds—while losing touch with their underlying civic identity and institutions.

The results of a 2011 citizenship quiz reported by Newsweek seem to bear that theory out. For example, of the 1,000 respondents, more than 60 percent did not know the term of a U.S. Senator (six years), more than a quarter did not know who is in charge of the executive branch (the President), less than 20 percent could name a single power delegated to the federal government, and less than one-third knew that the U.S. Constitution is the supreme law of the land. On the other hand, more than three-quarters of respondents knew what Martin Luther King, Jr. did, over 70 percent knew the name of the Vice-President (then Joe Biden), nearly 70 percent knew the Declaration of Independence was signed on July 4, 1776, and 60 percent knew who the United States fought during World War II. This data could be taken to suggest that Americans today are more likely to be familiar with figureheads and notable events than with ideas, principles, or processes. We simply prefer the highlight reel.

The intuition that Americans are more likely to familiarize themselves with figureheads and heroes than political theory is further reflected in their intimate knowledge of pop culture. Here are two gems from a 1998 study by the National Constitution Center (figures are as of 1998):

These developments in civic illiteracy are linked to another dangerous trend: civic disengagement.

The tyranny of a prince in an oligarchy is not so dangerous to the public welfare as the apathy of a citizen in a democracy.

While a 2017 Pew Research poll found that the United States trails most developed countries in voter turnout—roughly 56 percent of the voting-age population participated in recent elections—civic disengagement runs deeper than mere political disengagement. Over the past several decades, Americans have withdrawn from the institutions that have traditionally served to shape identity, build community, teach values, and unite individuals—institutions like family, the Rotary Club, the YMCA, and churches.

Likely aware of this phenomenon, Senator Mike Lee commissioned the Social Capital Project, which released its first report, entitled “What We Do Together,” in May 2017. The findings are remarkable—and telling. For example, between 1970 and 2016, “the share of children being raised by a single parent (or by neither parent) rose from 15 percent to 31 percent.” Between 1970 and 2015, “births to single mothers” nearly quadrupled, growing “from 11 percent of all births to 40 percent.” And between 1973 and 2016, the percentage of Americans between the ages of 18 and 64 who live with a spouse fell from 71 percent to 50 percent.

The report provides similar insights on more general social interactions as well. The percentage of Americans who spend several evenings a week with neighbors has been cut nearly in half. The average amount of time younger workers spend with coworkers outside the workplace has dropped from two-and-a-half hours to under one hour.

Discussing these findings, Max Bloom last year summarized that “community organizations across America, from B’nai B’rith to the Red Cross to the Freemasons, have been losing members since the 1980s.” Bloom drew the conclusion that “[p]olitics has become a substitute for the rich network of social affiliations that formerly structured American life.” This should not be surprising. “Humans are inherently social,” and Americans’ disengagement from civic institutions cannot undo that design. As Bloom opined, partisan politics has thus “turned into something of an identity for a large and increasing body of Americans, in the way that most Americans used to find identity in their synagogue, their neighborhood, their union hall, their bowling league.”

Americans, in other words, have largely jettisoned the avenues of civic engagement that once made the concept of “We the People” meaningful and, as in most areas of life, have instead simply opted for consumerism. This has opened the door for civic education, as well as law and politics more generally, to become a media-driven enterprise. And at a time when so many Americans are seeking their identity in the tribalism of political parties rather than cross-sectional institutions, one can only expect the politicization and polarization of everything from professional athletes to comedians to talk show hosts.

There is no indication, however, that athletes or talk show hosts are any more likely to study the Nation’s history or grapple with the reasons for its features than are everyday citizens. Our crisis of civic illiteracy is collective. This suggests that as long as civic education is contracted out to entertainers, civic discourse, like sports and film, will be more a matter of emotion than of reason.

The point here is not that entertainers have no business joining civic discourse. That would be quite counter to our societal design. The more inclusive our discourse, the better. The point is that as We the People lose our civic literacy and withdraw from the institutions that have traditionally fostered unity and carried our National identity forward, our political discourse begins to resemble entertainment—a superficial and emotional art—more so than a process of well-informed, well-reasoned debate among everyday citizens about ideas and principles.

There is nothing, according to me, that deserves more to attract our regard than the intellectual and moral associations of America. We easily perceive the political and industrial associations of the Americans, but the others escape us; and if we discover them, we understand them badly because we have almost never seen anything analogous. One ought however to recognize that they are as necessary as the first to the American people, and perhaps more so.

Where we stand is that even as civic literacy declines and disengagement expands, every area of life has become politicized. The “politicization of everything” does seem to suggest a thirst to take the reigns of self-governance. But jaw-dropping civic illiteracy reveals a real lack of qualifications for the job. And rather than educating themselves on the basics of our shared story and the philosophical foundations of our societal design, many citizens are flocking to just-as-uninformed pop-culture icons who have the platforms to fill the void left by our collective abandonment of traditional civic institutions.

We are less informed and less engaged. As a result, our current state of affairs is defined by division and polarization marked by cultural and political leaders who deal in a brand of rhetoric and hyperbole designed to trigger emotional responses from loyal followers that reinforce division and disconnect within the body politic. But society cannot emote its way to productive policies and good self-governance. Our republican form of government requires a well-informed and engaged citizenry willing to move beyond rhetoric and engage ideas and principles civilly through logic and reason. That requires educators equipped to teach those principles and leaders courageous enough to live them.

Our hope is that we as a society will take seriously our crisis of civic illiteracy and journey together on the road to recovering a National identity of We the Informed and Engaged People. We are encouraged by the work of many wonderful groups, such as ConSource, the National Constitution Center, the National Institute for Civil Discourse, and the Center for the Constitution at Georgetown Law, just to name a few. Projects such as these—specifically designed to engage citizens and build community around boosting civic literacy—not only equip us to tackle difficult issues with an informed and reasoned approach, but also challenge our tendency to withdraw from the kinds of institutions that unite and shape us. With illiteracy and disengagement surging, that is something we need desperately.

There is work to be done.