House Member Chaffetz Wants You To Buy Him A House

Retiring Congressman Jason Chaffetz announced, on his way out the door, that he believes Congress should provide themselves a $2,500 housing allowance, in order to better cope with the obnoxious cost of DC accommodations. Since congressmen maintain a residence in the District in addition to their household commitments back home, the logic goes, the excessive rental prices in the district make government service affordable only to the independently wealthy. This is particularly difficult for parents like Chaffetz, who are simultaneously attempting to put multiple children through college. Stories are now cropping up of Members sleeping in their office. Perhaps some of them are true. But why shield our representatives from a problem they helped create?

I just looked up the listings for a luxury condo building not far from Capitol Hill. This building has a swimming pool, four grills on the roof, and a 24-Hour concierge in the lobby, among other amenities. Google Maps tells me it is a 23 minute walk to the Rayburn building, where Rep. Chaffetz’s office resides. It has the added benefit of being the residence of a number of my acquaintances (including one of my colleagues here at LDB), and, until recently, of at least one member of the United States Senate, so I am confident it is suitable. A 1 bedroom/1 bath (~700 square feet) in this building is currently listed at $2,090. Let’s call it an even two grand, to keep the numbers easy.

The current salary for a typical member of the House of Representatives is $174,000 (those in leadership positions get a bit more). It is always dangerous when lawyers try and do math, but my rough estimate is $174,000 nets something on the order of $10,000 per month after taxes. Once we pay for our $2,000 condo, that leaves a measly $8,000 or so per month – or, to put it another way, a post-luxury-condo income at something like the 85th percentile of American households, and more than twice the median income of Utah’s 3rd Congressional District, which Chaffetz represents (and presumably where the second household he must maintain resides). A hard knock life, indeed.

In truth, I have some sympathy for Chaffetz and his fellow legislators – or I would, if the difficulties about which he complains were not in significant respect the fault of the legislators themselves. The astronomical cost of housing in America’s major cities is not the capricious will of divine providence, it is the logical result of ninety-odd years of public policy designed to restrict supply.

For those not yet initiated into the exciting world of land use law, a brief primer (which will necessarily leave much detail out). In 1926, the United States Supreme Court handed down Village of Euclid v. Ambler Realty Co., which upheld a relatively new practice by which local municipalities declared which different parts of town could and could not be used for which purposes. Unprecedented in the history of the common law, decisions regarding the use of property were no longer within the power of the owner, to do with as he wished, but annexed to groups of “planners” who would, in their wisdom, guide the development of modern communities “designed” by the very much visible hand of the government. We now call this “zoning.” The specific iteration the Supreme Court considered, sometimes called Euclidean zoning or “single use” zoning, remains widespread, though it has fallen out of favor with our current batch of mandarins – the hot trend these days is towards “multiuse” initiatives, in which housing, retail and commercial spaces are placed on top of each other. Stroll through one of DC’s “gentrifying” neighborhoods, with condos on top of Chiplotle’s next to publicly funded bike-shares, and you’ll see the current vogue in action. Meanwhile, in a series of cases culminating in 2005’s Kelo v. City of New London, the Supreme Court expanded the power of eminent domain, granting local governments the power not simply to dictate acceptable uses, but to transfer land from the less favored to the more politically connected, sacrificing property rights on the altar of tax revenue (as with most pagan rituals, the rains from heaven rarely come). 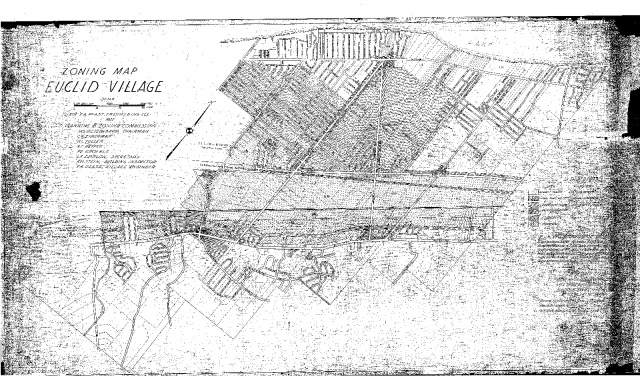 The legacy of this central planning is exactly what one would expect from a system of central planning. A few examples, among many, must suffice. A certain mid-century preference for single family detached housing – the proverbial leave-it-to-beaver A-frame with a white picket fence – effectively closed off large sections of land from working class families who needed more cost-effective “multi-family” arrangements (read: apartment buildings). This also kept out lower-income black and other minority populations (a feature, not a bug, of the planning in many parts of the country), assisting segregation efforts that were, after Supreme Court decisions in 1917 and 1948, not directly enforceable in a legal sense (for more on this point, see Richard Rothstein’s depressing, but important, new book The Color of Law). Large tracks in and near America’s urban centers were therefore tied up with low occupancy housing stock that persists to this day, while working class neighborhoods (again, typically not those of the wealthy and the “white”) were bulldozed to make space for freeways. Ironically, the modern trend now runs in the other direction, with concerns over environmental impact and integration driving planning fans towards laws that mandate “density” – because whatever we’re going to choose, it can’t be to let individuals live and use their property as they best see fit.

Other examples abound. Cities such as New York developed concepts of “air rights,” that prevent residential development from reaching as high as they otherwise might (our current president owes his business reputation in no small part to the successful gaming of this system). “Historic Preservation” laws prevent redeployment of older land. Rent control and other “tenant protections” drive up the cost of operating rental units. It is virtually impossible to evict a person in the District of Columbia, no matter their conduct. An acquaintance whose family operates an apartment complex in DC relates the story of one of his father’s tenants, who was entitled by law to resume living in an apartment after extensive repairs were made. The repairs were only necessary in the first place because the tenant’s home-based meth lab had exploded. The costs of those ne’er–do–wells and problem children is born by the rest of the population, whose housing cost must cover the shortfall.

The problem is further exacerbated by the newest hot idea among the operators of our local soviets, “mandatory inclusionary zoning.” These polices attempt to encourage the development of “affordable” housing by requiring that some percentage (often 25-30%) of each new apartment building be set aside for low income tenants, so as to improve housing opportunities for the poor and also increase levels of racial integration. The idea, like most of these ideas, is well-intentioned, but our mothers told us where good intentions lead. Requiring developers to take a loss on 25% of their work means the only projects that make economic sense are luxury accommodations for the affluent. The result is a sort of hollowed out urban core, with housing for the wealthy and the subsidized, and a stiff finger for the middle class – and that’s if the program actually works as well as the planners hope. All this adds up to the very simple fact that housing supply in urban American is artificially constrained. And after 90 years, the vested interests who own the constrained (and therefore artificially expensive) property have no interest in solutions, since any solution necessarily hurts their own investment. Across the country, the specter of Robert Moses haunts our urban centers – while the ghost of Adam Smith laughs at us.

It need not be this way. Perhaps some direction of the use of urban land are desirable, but whatever level of control that entails we are well past the point of diminishing returns – and we should keep in mind that Houston has gotten by without zoning laws these many years, and is not as of yet an apocalyptic hellscape. In large part, this problem is one of local government, and therefore beyond Congress’s purview (though not entirely: various federal regulations, from environmental reviews to HUD rules, impose costs on building).

But there is one city in the country that is not, and it happens to be the one in which Rep. Chaffetz found it so difficult to afford a pad. Congress could, if it wished, reform the District’s land use policies tomorrow. And so I have a proposal for Mr. Chaffetz: let’s turn our federal enclave into precisely the sort of laboratory the states are often failing to provide. Take a problem every member of Congress understands personally, and develop the sort of “free market solution” Republicans are always talking about. Let a thousand land uses bloom. While we’re at it, perhaps we could consider an end to the unlimited student loan money that is driving up the cost of college attendance for families like the Chaffetz’s – but we’ll leave that one for another day. In the meantime, it is right and just that our representatives experience the consequences of our public policies along with their fellow countrymen. If they can’t, with a six figure salary, keep bread on their table, let them eat cake.