The Advent of the Son of God

When Jenny and I honeymooned in Rome this summer, we stayed in a hotel about two blocks south of Piazza del Popolo. The (regrettably blurry) photo below is taken looking north-to-south in the Piazza. 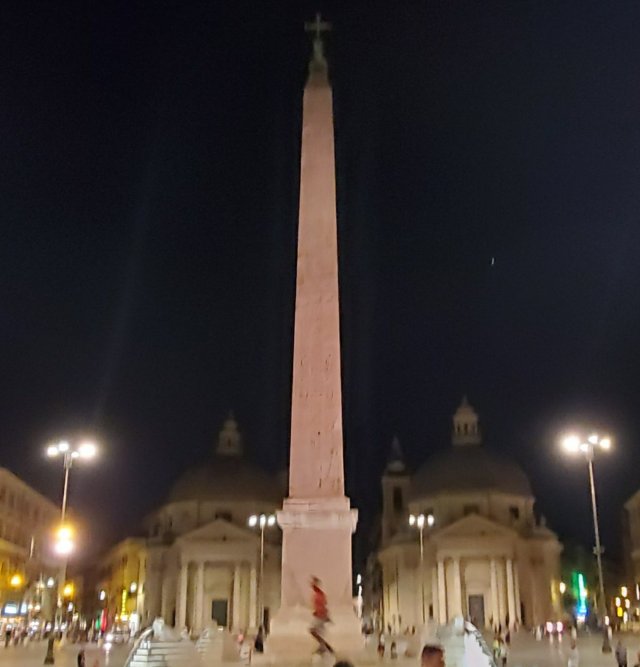 As you can tell from the photo, the center of the Piazza is marked by an obelisk.

Known as the Flaminio Obelisk, this monument is of Egyptian origin. At the time of Christ, Rome had expanded into the territory of the old Egyptian empire. Around 10 BCE, Caesar Augustus ordered this obelisk moved from Egypt to Rome. He also ordered an inscription to be added in Latin at its base: 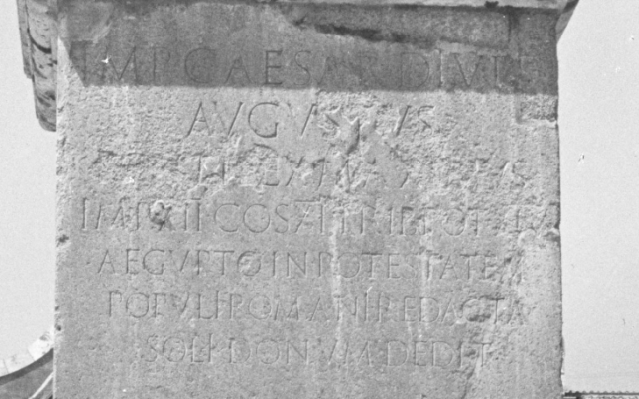 The text reads as follows:

“Imperator Caesar, the son of a god, Augustus, Chief High Priest, . . . , having subjected Egypt to the power of the people of Rome, he gave this gift to the sun.”

As this inscription suggests, Augustus was a big deal — Imperator, Son of God, Chief High Priest! And, unlike some other Caesars who were big deals mostly in their own heads and maybe to the sycophants surrounding them, the Roman people also viewed Augustus in a very positive light. Consider how he was celebrated by Virgil, who lived through most of the first decade of Augustus’s reign as Caesar, in the Aeneid:

The adventum of Augustus, the son of god, was a monumental event. Fittingly, an adventus was a major ceremony in ancient Rome It was a time when an important figure such as the Emperor would be ceremonially welcomed into large cities like Rome, usually after some important accomplishment like a military conquest. As Virgil indicates, the people of Rome expected Augustus’s advent to usher in a golden age of peace and prosperity throughout the Empire, a time we still refer to today as the Pax Romana.

Luke opens his Gospel with a story about the birth of a contemporary of Augustus’s. Luke wastes little time getting to the key details. A divine messenger was sent by God to tell a young Jewish woman named Mary, engaged to Joseph of Nazareth, that she had miraculously conceived a child who would “be called Son of God.” In quick succession, we then hear from three characters, Elizabeth, Mary, and Zechariah, all of whom believe this to be an omen that God was about to fulfill his promise to restore the people of Israel to peace and prosperity after they had suffered under foreign oppression and tyranny for centuries.

The narrator then transitions to the immediate lead-up to the birth of Mary’s child. We are told that “in those days” Caesar Augustus — the son of god, remember, according to the Romans — issued a decree “that all the world should be registered.” From contemporaneous sources, we know this decree was unpopular with the Jewish people, serving as yet another reminder that they remained under the thumb of foreign occupation. Indeed, the author of the Gospel would later tell us about a man named “Judas the Galilean” who “rose up at the time of the census” and rebelled against Rome over this census.

Other Galileans, however, persuaded by cooler heads to “leave off any further opposition,” complied with the decree. Joseph of Nazareth and his betrothed Mary appear in the Gospel as two such individuals, traveling from Nazareth to Joseph’s ancestral hometown of Bethlehem to register. We are then reminded that Bethlehem is “the city of David,” the heroic king of Israel who led the nation during its golden age nearly a thousand years past, and from whose lineage would come another leader, according to the Jewish prophets, to usher in a new golden age. While in Bethlehem, Mary’s child, Jesus, was born.

From outward appearances, this birth was a nonevent — Jesus is born in a barn and laid in a feeding trough. Yet in truth this was an adventus, as “a multitude of the army of heaven” appeared outside the city to commemorate this birth. This was, after all, the arrival of the Son of God after centuries of waiting!

The narrator does not want us to miss this point. Immediately after the birth narrative, for instance, the Gospel jumps to a point in time when Jesus was twelve, and he reminds his parents about his mission to tend to “my Father’s” — i.e., God’s — matters. After that, the narrator jumps ahead again a number of years to the baptism of Jesus, where we are told a voice from heaven addresses Jesus as “my Son.” Then, just in case we the reader still haven’t gotten the point, the author of the Gospel walks us through the genealogy of Jesus, reminding us that he was, quite literally, the “son of God.”

As Luke’s Gospel is read this Christmas, we should hear the message he is trying to convey. He is unabashedly co-opting the mythos of Augustus and applying it to Jesus of Nazareth. At the behest of an oppressive decree from the one who purported to be the “son of god,” the true Son of God makes his “advent” into the royal city, greeted by the armies of heaven in the process. This advent marked the true fulfillment of prophecies about the beginning of a new golden age, a promise “for all people” of “peace on earth.” The subtext speaks loud and clear: Jesus, not Augustus, is the Son of God, and it is His adventus that promises peace, and not just a Pax Romana but a Pax Munda.

The Christmas story thus contains within it a powerful, even provocatively “political,” message. Augustus may make certain claims about who he is and what his rule promises, but he is really bandying about titles and making claims about himself that are true of the legitimate Ruler of the world alone.

Of course, Jesus’s rule looks starkly different from Augustus’s — his “kingdom is not from this world,” after all. It is a radically different regime, one where the least is the greatest and the leader is the one who serves. Given these irreconcilable differences, we cannot pledge ultimate fealty to both Augustus’s and Jesus’s regimes. No person “can serve two masters.” Christmas, then, calls us to choose. As Luke’s Gospel reminds us, the choice should be easy. Augustus is and remains dead and his kingdom is gone: the fate of Ozymandias that all will share. Meanwhile, the true Son of God lives and his kingdom — the church — continues to expand throughout the world.

Consider again the Flaminio Obelisk, a marvelous demonstrative for the message of Luke’s Gospel.

The inscription in which Augustus claims the title “son of god” is at the base of the monument. What is at the top? A cross — the symbol of Jesus of Nazareth. And in the background, two churches: the physical manifestation of Jesus’s still-extant kingdom. The true Son of God’s kingdom endures, and he is and will forever be exalted over the impostor, whose kingdom is defunct.

May we hear these truths this Christmas and order our lives accordingly.