In a combined appeal involving the Department of Labor’s (DOL) contested construction of the Fair Labor Standards Act (FLSA), a panel of the Ninth Circuit recently held that DOL’s interpretation of regulations implementing FLSA was not entitled to Auer deference, ruling in favor of the defendants, a number of restaurants who had been sued by employees alleging violations of FLSA. See Marsh v. J. Alexander’s, No. 15-15791 (9th Cir. Sept. 6, 2017). In explaining why DOL was not entitled to Auer deference, the panel exposed the deficiencies of the doctrine–admittedly, a favorite theme of mine.

FLSA requires essentially all employers to pay their employees at least $7.25 an hour. 29 U.S.C. § 206(a)(1)(c). For employees who work for tips, however, FLSA allows an employer to credit as paid wages any tips received by the employee. Id. § 203(m). For employees who work in more than one capacity for an employer, DOL regulations clarified that this “tip credit” provision only applies with respect to hours worked in the tipped-position; it cannot count against the wages the employee earned for work done in a non-tipped capacity. 29 C.F.R. § 531.56(e).

So, for example, imagine an employee who works both as a bartender (for tips) and a manager (for hourly rate), but under different clock-in functions. Under this regulation, her employer cannot credit tips she earns as a bartender against the hourly rate to which she is entitled as a manager.

In addition to this regulation, however, DOL recently added an interpretive gloss in a handbook, stating that it would treat individuals “effectively employed in dual jobs” the same as individuals actually employed in dual jobs. Field Operations Handbook § 30d00(f) (2016) (“handbook”) (emphasis added). Any employee who worked “in excess of 20 percent of the hours worked in the tipped occupation in the workweek” doing tasks besides working directly for tips (e.g., rolling silverware as opposed to waiting on customers) would be considered “effectively employed in dual jobs,” meaning that the employer would have to pay the regular minimum wage for that time, without being able to discount the employee’s tips earned during that time. Id.

With this interpretive gloss on his side, Alec Marsh sued his employer, the restaurant J. Alexander’s, alleging that they were crediting his tips against his wages even though he was “effectively employed in dual jobs,” given the amount of sidework he was assigned by management in addition to his serving duties. The district court rejected this claim, and, as relevant here, concluded that DOL’s interpretation of the regulation was not entitled to deference. Marsh v. J. Alexander’s, No. 15-15791 (9th Cir. Sept. 6, 2017), slip op. at 17.

The Ninth Circuit agreed. While recognizing that courts must defer to agency interpretations of their own ambiguous regulations, see Auer v. Robbins, 519 U.S. 452 (1997), the panel clarified that deference is not warranted “when the interpretation is ‘plainly erroneous or inconsistent with the regulation,'” Auer, 519 U.S. at 462, when deference “would impermissibly ‘permit the agency, under the guise of interpreting a regulation, to create de facto a new regulation,'” Christensen v. Harris County, 529 U.S. 576, 588 (2000), or when the interpretation is “inconsistent with a congressional directive.” Marsh, slip op. at 18.  When Auer deference is not warranted, the Ninth Circuit applies the quasi-deferential* standard elaborated in Skidmore. See Skidmore v. Swift & Co., 323 U.S. 134 (1944).

In this case, the regulation was unambiguous so Auer deference was not warranted. The regulation itself gives, as an example of an individual not employed in a dual capacity, the illustration of “a waitress who spends part of her time cleaning and setting tables, toasting bread, making coffee and occasionally washes dishes or glasses.” 29 C.F.R. § 531.56(e). In the words of the panel,

[T]he DOL’s interpretations of the dual jobs regulation have evolved from requiring a determination as to whether an employee is “engaged in” two distinct jobs . . . to focusing on what (in everyday language) would be called a single job that involves a range of intermingled duties that must be performed throughout the course of the day.

No wonder, then, that the panel went on to conclude that the interpretation “does not merit deference” because DOL attempted to “‘create de facto a new regulation.'” Id., slip op. at 28 (quoting Christensen, 529 U.S. at 588). This handbook guidance “create[d] an alternative regulatory approach with new substantive rules that regulate how employees spend their time.” Id., slip op. at 33. Such clear-cut regulation “masquerading as an interpretation” did not warrant Auer deference. Id. And because this interpretation conflicted with the plain meaning of the regulation, the Ninth Circuit did not even apply Skidmore deference, id., slip op. at 33 n.19, instead opting to invalidate the handbook rule.

This created a circuit split with the Eighth Circuit, which had applied Auer deference to uphold this handbook rule in a similar case. See Fast v. Applebee’s Int’l, Inc., 638 F.3d 872, 879 (8th Cir. 2011). The Ninth Circuit rejected the Eighth Circuit’s decision, articulating several reasons (though they noticeably did NOT ding the Eighth Circuit for using Webster’s Third, see Fast, 638 F.3d at 879-80). First, the Ninth Circuit noted that the Eighth “failed to consider the regulatory scheme as a whole.” Marsh, slip op. at 35. Second, the Eighth Circuit mistakenly relied on cases that actually “suggest that the [handbook’s] approach is unreasonable.” Id., slip op. at 36. Third, the “prescription of a specific temporal limit on certain duties” is not “a reasonable method for determining when an employee has a second job,” id., and the agency’s reliance on other instances where this method is employed was misplaced because those examples were “either legislatively enacted or promulgated through notice and comment rulemaking,” id., whereas the DOL’s handbook rule was a form of “regulatory dark matter” that was not subject to any sort of enactment process outside of the agency.

According to Marsh, the dual jobs regulation and Opinion Letters do not adequately address this problem, and so the DOL must be free to step in with a solution. Our task, however, is not to pass on the wisdom of the [handbook’s] approach, but to determine whether the DOL can enforce this approach in the guise of interpreting a regulation. We hold only that, at present, no provision with the force of law permits the DOL to require employers to engage in time tracking and accounting for minutes spent in diverse tasks before claiming a tip credit. Our decision today does not prevent the DOL from attempting to promulgate this approach through rulemaking, nor prevent Congress from requiring such an approach through legislation.

Id., slip op. at 38. An Article III court is not empowered to give its imprimatur to law enacted apart from proper process, even if that law may be “important” and “necessary.” Id., slip op. at 42 (Paez, J., concurring and dissenting).

The dissent in Marsh sided with the Fast court, contending that key terms of the regulation were ambiguous, warranting Auer deference to the handbook rule. Id., slip op. at 44 (Paez, J., concurring and dissenting) (arguing that “part of her time” and “occasionally,” terms used in the regulation without definition, were ambiguous enough to permit DOL to interpret them through the handbook and still merit deference from the court).

The problem with this logic, however, is that language is always under-determinate when analyzed closely enough, so everything is ambiguous to a certain extent, and certainly to adventurous readers on a quest to find ambiguity in order to exploit it (e.g., federal agencies chafing at the constraints contained within an organic statute or previously-enacted regulations). As the D.C. Circuit has observed,

The phenomenon we see in this case is familiar. Congress passes a broadly worded statute. The agency follows with regulations containing broad language, open-ended phrases, ambiguous standards and the like. Then as years pass, the agency issues circulars or guidance or memoranda, explaining, interpreting, defining and often expanding the commands in the regulations. One guidance document may yield another and then another and so on. Several words in a regulation may spawn hundreds of pages of text as the agency offers more and more detail regarding what its regulations demand of regulated entities. Law is made, without notice and comment, without public participation, and without publication in the Federal Register or the Code of Federal Regulations.

Tellingly, the dissent reveals the endgame of finding ambiguity everywhere. The dissent contends that “any confusion” with respect to understanding the regulation “demonstrates that the regulation is ambiguous.” Marsh, slip op. at 45 (Paez, J., concurring and dissenting). While perhaps the average administrative law practitioner might be immune to the shocking nature of this statement, any contract lawyer or litigator having argued a contract dispute knows that “language is not ambiguous simply because the parties disagree on its meaning.” E.I. du Pont de Nemours & Co. v. Allstate Ins. Co., 693 A.2d 1059, 1061 (Del. 1997). It would be shocking, indeed, if a court held that any time two parties disagreed as to the meaning of a term in a contract, the side responsible for the ambiguity presumptively won. See Mesa Air Group, Inc. v. Dep’t of Transp., 87 F.3d 498, 506 (D.C. Cir. 1996) (“Contra proferentum is a basic principle of contract law which provides that ‘[i]n choosing among the reasonable meanings of a promise or agreement or a term thereof, that meaning is generally preferred which operates against the party who supplies the words or from whom a writing otherwise proceeds.'” (quoting Restatement (Second) of Contracts, § 206 (1979))). But that is the logical end of the Auer doctrine, making the courts–whose fundamental job is, in theory, “to say what the law is,” Marbury v. Madison, 5 U.S. (1 Cranch) 137, 177 (1803)–basically superfluous, since such disputes generally arise only when the law is less than crystal clear. If the rule is “dispute = ambiguity = deference to agency,” then adjudication becomes a predetermined formality rather than a fair hearing on the merits of the respective parties’ positions.

Perhaps the best part of the Marsh decision is buried in a footnote: if a regulation appears out-of-date or in need of revision, “the solution is to amend the regulation or the statute, not to craft a new rule under the guise of interpreting the current unambiguous language.” Marsh, slip op. at 35 n.22. The shell game being played thanks to the enabling effects of the Auer doctrine is increasingly coming to light–hell, even Slate now sees it! 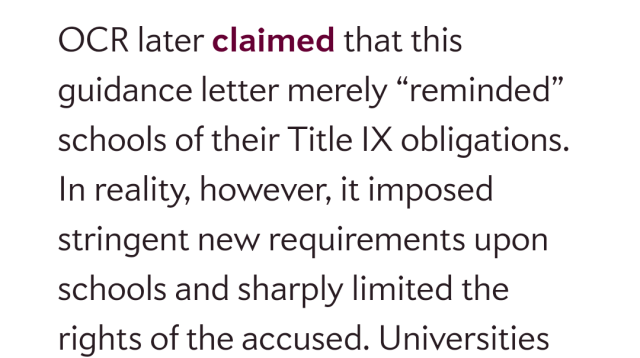 It’s time to bury this lawless doctrine for good.

*As my Administrative Law professor Judge Laurence Silberman once pointed out in class, Skidmore deference is nothing more than the “deference” accorded a legal brief: it gives weight to an agency’s interpretation proportional to the “thoroughness evident in its consideration, the validity of its reasoning, . . . and all those factors which give it power to persuade, if lacking power to control.” Skidmore v. Swift & Co., 323 U.S. 134, 140 (1944). See United States v. Mead Corp., 533 U.S. 218, 250 (2001) (Scalia, J., dissenting) (“[T]he rule of Skidmore deference is an empty truism and a trifling statement of the obvious: A judge should take into account the well-considered views of expert observers.”).

Tags: auer deference, ninth circuit
← Why Don’t We Flip the Presumption of Auer? Towards an Administrative “Rule of Lenity”
What Unites Us? →