Justice Gorsuch is just about to start his tenure on the highest court in the land, but he’s already got quite a few great quotes among his many opinions during his time on the Tenth Circuit. Here, in no particular order, is a sneak preview of things to come.

“In enlightenment theory and hard won experience under a tyrannical king the founders found proof of the wisdom of a government of separated powers. In the avowedly political legislature, the framers endowed the people’s representatives with the authority to prescribe new rules of general applicability prospectively. In the executive, they placed the task of ensuring the legislature’s rules are faithfully executed in the hands of a single person also responsive to the people. And in the judiciary, they charged individuals insulated from political pressures with the job of interpreting the law and applying it retroactively to resolve past disputes. This allocation of different sorts of power to different sorts of decisionmakers was no accident. To adapt the law to changing circumstances, the founders thought, the collective wisdom of the people’s representatives is needed. To faithfully execute the laws often demands the sort of vigor hard to find in management-by-committee. And to resolve cases and controversies over past events calls for neutral decisionmakers who will apply the law as it is, not as they wish it to be. Even more importantly, the founders considered the separation of powers a vital guard against governmental encroachment on the people’s liberties, including all those later enumerated in the Bill of Rights.”

“If the separation of powers means anything, it must mean that the prosecutor isn’t allowed to define the crimes he gets to enforce. Yet, that’s precisely the arrangement the Sex Offender Registration and Notification Act purports to allow in this case and a great many more like it. . . . So unusual is this delegation of legislative authority that to find an analogue you might have to look back to the time Congress asked the President to devise a code of ‘fair competition’ for the poultry business—a delegation of legislative authority the Supreme Court unanimously rejected and Justice Cardozo called ‘unconfined and vagrant,’ a ‘delegation running riot.’ A.L.A. Schechter Poultry Corp. . . . Even then you could be excused for thinking the delegation before us a good deal less cooped or caged than that one. After all, it doesn’t just grant some alphabet soup agency the power to write rules about the chicken trade. It invests in the nation’s chief prosecutor the authority to devise a criminal code governing a half-million people. . . . Delegation doctrine may not be the easiest to tease out and it has been some time since the Court has held a statute to cross the line. But it has also been some time since the courts have encountered a statute like this one—one that, if allowed to stand, would require the Judiciary to endorse the notion that Congress may effectively pass off to the prosecutor the job of defining the very crime he is responsible for enforcing. By any plausible measure we might apply that is a delegation run riot, a result inimical to the people’s liberty and our constitutional design.”

“We are not in the business of expounding a common law of torts. Ours is the job of interpreting the Constitution. And that document isn’t some inkblot on which litigants may project their hopes and dreams for a new and perfected tort law, but a carefully drafted text judges are charged with applying according to its original public meaning.”

“Both elements are essential to a conviction and the government offers no sensible way or reason why a mens rea requirement applied to the statute might take an olympian leap over the first essential element and touch down only on the second.”

“Often enough the law can be ‘a ass—a idiot,’ Charles Dickens, Oliver Twist 520 (Dodd, Mead & Co. 1941) (1838)—and there is little we judges can do about it, for it is (or should be) emphatically our job to apply, not rewrite, the law enacted by the people’s representatives. Indeed, a judge who likes every result he reaches is very likely a bad judge, reaching for results he prefers rather than those the law compels. So it is I admire my colleagues today, for no doubt they reach a result they dislike but believe the law demands—and in that I see the best of our profession and much to admire. It’s only that, in this particular case, I don’t believe the law happens to be quite as much of a ass as they do.”

“[O]bedience to the Fourth Amendment always bears that cost and surely brings with it other benefits. Neither, of course, is it our job to weigh those costs and benefits but to apply the Amendment according to its terms and in light of its historical meaning. Besides, it is hardly the case that following the Fourth Amendment’s teachings would leave the government as bereft of lawful alternatives as it seems to suppose. . . . Our duty of fidelity to the law requires us to respect all these law enforcement tools. But it also requires us to respect the ancient rights of the people when law enforcement exceeds their limits. In this case the two arguments the government offers to justify its conduct can claim no basis in our constitutional tradition.”

“[I]n our legal order judges distinguish themselves from politicians by the oath they take to apply the law as it is, not to reshape the law as they wish it to be. And in taking the judicial oath judges do not necessarily profess a conviction that every precedent is rightly decided, but they must and do profess a conviction that a justice system that failed to attach power to precedent, one that surrendered similarly situated persons to wildly different fates at the hands of unconstrained judges, would hardly be worthy of the name. At the center of this appeal is a claim about the power of precedent. In fact, the whole field in which we are asked to operate today—dormant commerce clause doctrine—might be said to be an artifact of judicial precedent.”

“All the same, our observer plows by, some combination of too blind and too fast to read signs adequate for interstate highway traffic. Biased, selective, vision impaired, and a bit of a hot-rodder our observer may be, but the reasonable observer of Justice O’Connor’s description he is not.”

“We write today to reaffirm that the constitutionally enumerated right of a private citizen to petition the government for the redress of grievances does not pick and choose its causes but extends to matters great and small, public and private.”

“[T]he great project of Justice Scalia’s career was to remind us of the differences between judges and legislators. To remind us that legislators may appeal to their own moral convictions and to claims about social utility to reshape the law as they think it should be in the future. But that judges should do none of these things in a democratic society. That judges should instead strive (if humanly and so imperfectly) to apply the law as it is, focusing backward, not forward, and looking to text, structure, and history to decide what a reasonable reader at the time of the events in question would have understood the law to be–not to decide cases based on their own moral convictions or the policy consequences they believe might serve society best.”

…and the time Judge Gorsuch diagrammed a sentence mid-opinion: 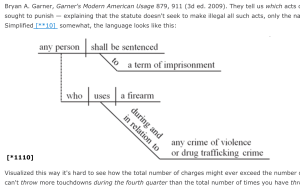 We are stoked to be able to say Justice Gorsuch, and we look forward to quotable opinions forthcoming soon from the newest member of the Supreme Court!

← Judge Gorsuch on the Ninth Amendment: “I think it means what it says.”
Who’s Afraid of the Federalist Society? [Hint: Dick Durbin] →