I was one of those types who insisted throughout the primary process that there was just “no way” Donald Trump became the nominee. As much as I understood the grassroots upswell behind him, I figured that his support would fizzle as his incompetence and unfitness became clearer and/or more relevant. Besides, we had other intelligent, interesting, and principled candidates to choose from (#gilmentum); and I was sure that, once the field shrunk down from an ungodly seventeen candidates to a more digestible three or four, one of the other comparatively far-more qualified candidates would surge to become the nominee.

But primary voters didn’t care. The rage that was sweeping through the party – at the Obama administration, at coastal elites looking down their noses at middle America, at the Republican establishment consistently walking back on their campaign promises to change the status quo, etc. – didn’t heed anything other than the fact that it had finally found a messenger who not only empathized but who willingly accepted “the mantle of anger.” Primary goers were willing to overlook Trump’s demeaning of military heroes, his xenophobic rhetoric (granted, some of his supporters are attracted to this rhetoric, but – at least anecdotally – I know a number of individuals supporting Trump who are upset with his language in this regard), his misogyny, etc. They were just pissed, and they found someone who actually seemed like he was going to take a sledgehammer to the beltway-insiders club to which they felt they had lost everyone else they ever sent to Washington.

However, even righteous anger has its limits. And the fact is that Trump is a buffoon. A disaster. A dangerous demagogue who is preying on the legitimate frustrations and fears of individuals while peddling nothing but himself as snake oil. Sad!

Sometimes, leadership requires dealing with hard issues and angry supporters. It requires patiently explaining to people how what they apparently want to see happen is not going to solve the problems that frustrate and anger them. It requires demonstrating that some modicum of basic human decency and understanding of domestic and foreign policy is needed to fill the most powerful office in the world. That time has come (and really has been long overdue).

With recent chatter that GOP leaders are staging – no joke – an “intervention” for Trump, with some even planning for the contingency that Trump could drop out of the race, it seems an opportune moment to finally cut the cord, pull the trigger, or whatever metaphor you prefer. If, somehow, the nominee slot was vacated, Republican Party Rule 9 would kick in, which provides for filling vacancies in nominations:

(b) In voting under this rule, the Republican National Committee members representing any state shall be entitled to cast the same number of votes as said state was entitled to cast at the national convention.

(d) No candidate shall be chosen to fill any such vacancy except upon receiving a majority of the votes entitled to be cast in the election.

Here’s exactly how this could go:

This is probably just wishful thinking, unfortunately. But, if nothing else, at least we’d get to see Sad Chris Christie one more time. 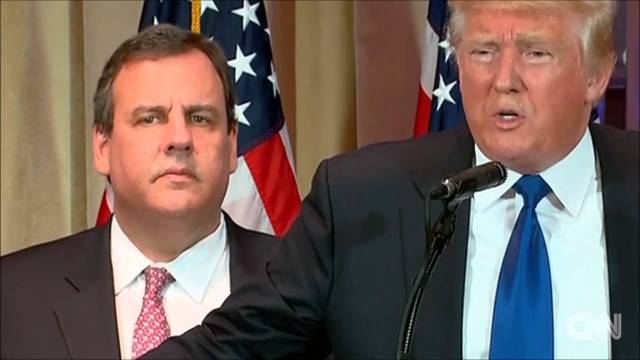