Worried about the specter of a President Donald J. Trump? Get a load of President Franklin D. Roosevelt. FDR is often lionized, particularly by the left, for  getting the nation out of the great depression with his economic programs and leading the country to victory in World War II (though, of course, he did not live to see the end of the war in either theater).

“All ironies contained herein are unintended”

The rose-colored filter of historical reminiscence, however, often sifts out inconvenient details that do not fit into tidy narratives. Enter Tyler Cowen over at Marginal Revolution to raise a great point in response to the left’s criticism of Trump’s autocrat-like demagoguery:

Do you feel the same way about FDR’s court-packing scheme and internment of Japanese-Americans?  Were the Democratic Congressmen — wasn’t that just about all of them? — who stood with FDR on the latter issue better or worse than Paul Ryan for standing with Trump today?  If FDR had offsetting virtues as President, because he did in fact “get a lot done,” and you in general support him for that, are Trump supporters allowed to have a similar belief today about their candidate, viewing him in the lineage of FDR?

He goes on to refer to just a few examples of FDR’s egregious abuses of power:

I haven’t even mentioned slavery or race until now, nor Nagasaki nor Native Americans.  And oh — did I mention that the New Deal coalition signed off on a lot of bigotry and segregation to keep the party together and get the core agenda through?  Or how about the forcible repatriation of perhaps up to 2 million Mexicans, without due process of law, and many being American citizens, during the 1930s?

I felt inspired to unpack this a bit more, not to defend Trump or to open the Overton Window any further, but rather to point out the apparent double standard the left has – or, as Cowen put it, the left’s current “Authoritarianism for Me but Not For Thee” attitude.

A. To this day, FDR probably remains overshadowed only by Andrew Jackson in his commission of race-based atrocities as President. As the aforementioned quotes referenced, FDR was guilty of numerous sins: 1) He oversaw the mass deportation of Mexicans, including numerous U.S. citizens (with birth certificates!), who proved to be convenient scapegoats for the problems of white unemployment and who suffered as a result of a growing protectionist attitude among Americans, especially labor unions; 2) He played into national-security-related fears to order by fiat the forcible internment of over one hundred thousand Japanese-Americans, “one of the most flagrant violations of civil liberties in American history“; 3) He ignored horrifically racist and segregationist attitudes and policies towards African-Americans to retain the “support he desperately needed” to advance his agenda; 4) And, of course, he turned a deaf ear to the plight of European Jewry despite it being clearly brought to his attention.

B. When the other branches of the federal government refused to play ball with FDR’s agenda, he schemed to make their opposition irrelevant, separation of powers be damned. Most famously, in order to squash opposition to the New Deal from the judiciary, FDR announced, shortly after re-election in 1936, a proposal to allow him to nominate up to six new justices to the Supreme Court in addition to the nine sitting justices, in order to overwhelm the Court with yes-men willing to go along with his New Deal reforms. Though this proposal never became law, most legal scholars view it as a factor, if not the primary catalyst, for the “switch in time that saved nine,” when the Court began rubber-stamping FDR’s legislative agenda. No wonder historians assess this episode as evincing FDR’s “dictatorial impatience with the Constitution.” 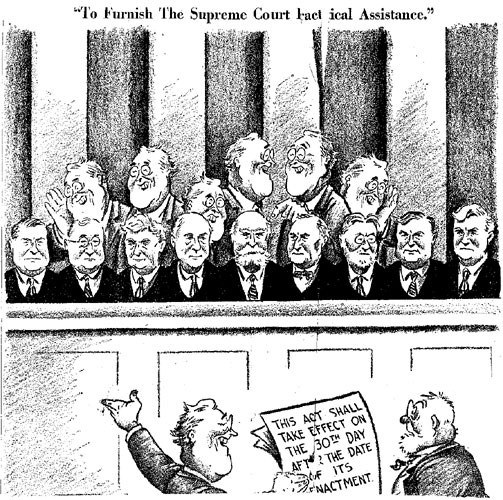 Keep that in mind as you clutch your pearls discussing Trump’s Supreme Court list or the Republicans’ blockade of Merrick Garland’s nomination – FDR essentially threatened to completely eliminate the Supreme Court’s check on his authority by attacking and overwhelming the institution as a whole.

C. FDR had a penchant for making nice with fascists and tyrants. About Mussolini, Roosevelt wrote:

I am much interested and deeply impressed by what he has accomplished and by his evidenced honest purpose of restoring Italy and seeking to prevent general European trouble.

I don’t mind telling you in confidence that I am keeping in fairly close touch with the admirable Italian gentleman.

It is worth noting that these genial comments from FDR came almost a decade after Mussolini had “reduced the influence of the judiciary, muzzled a free press, arrested political opponents, continued condoning fascist squad violence . . .  consolidated his hold on power. . . . declared himself dictator of Italy. . . . bann[ed] opposition parties, kick[ed] out over 100 members of parliament, reinstat[ed] the death penalty for political crimes, ramp[ed] up secret police activities and abolish[ed] local elections.” Distressingly, the admiration was mutual.

And, of course, FDR and Stalin – i.e., one of the world’s most successful genocidal maniacs – had a notoriously “cozy” relationship. 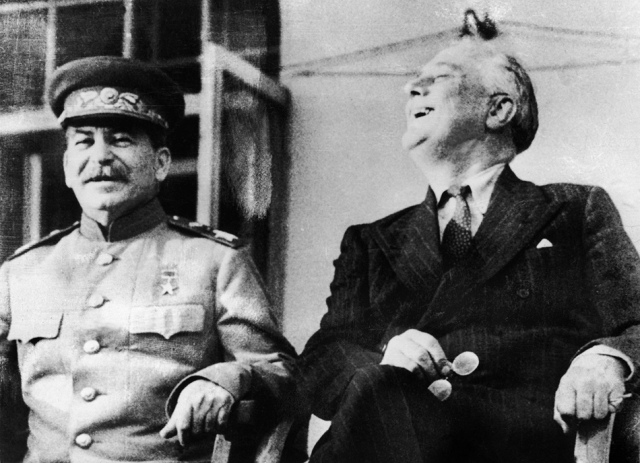 Over at The Federalist, Kyle Sammin notes how the New Deal was precipitated by a novel collectivism instilled in desperate Americans in the wake of the Depression:

It was an unprecedented temporary shift in the American mindset, born out of an almost feudal allegiance to the president, whom many desperate Americans saw as their secular savior.

This sounds eerily familiar today. God save us from such myopic collectivism and personality cults. But, before you look down your nose at your Trump-supporting friend or relative to point out the speck of dust in their eyes, be sure to fish out the huge plank in your own.